Lisbon and the 7 Hills

Arriving in Lisbon either by plane or by sea you are always surprised by the imposing hills which overlook the city. The city is indeed famous for its seven hills. However, the seven hills are a legend because there would be in fact 8. Everything starts from a reference to the 17th century in the book of São Nicolau de Oliveira. “O Livro das Grandezas de Lisboa” (The Book of Lisbon Grandeurs) where he describes Lisbon and its seven giants: São Jorge, São Vicente, São Roque, Santo André, Santa Catarina, Chagas e Sant’Ana. However, the author forgot to count another one (Hill). That of Graça hidden behind the Saint-Georges castle. And it is not just any hill, it is the highest in Lisbon which peaks at 200m at sea level.

We have listed these hills for you to explore the best during your stay in Lisbon. 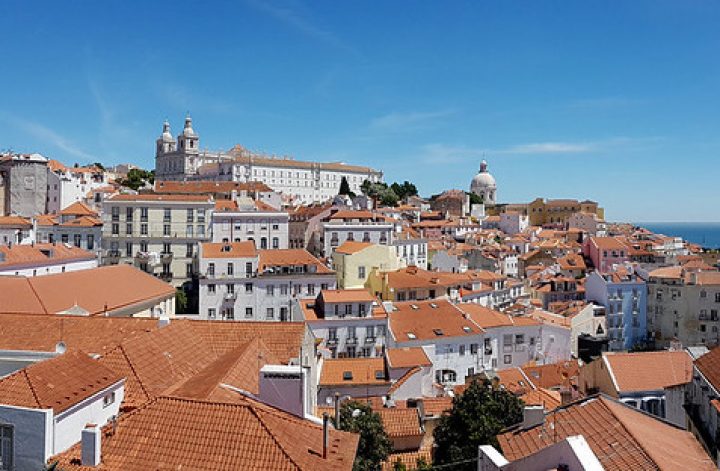 It is the most famous hill in Lisbon, also one of the highest, it is the one which shelters the famous castle of Sao Jorge from where the hill takes its name. Knowing that old Lisbon was built on this hill, it is at this precise place that one can explore the oldest districts of Lisbon: Alfama and Mouraria. There are two points of view to go to which are totally different. the first, Miradouro das Portas do Sol, overlooks the Tagus. It is very aptly named because there is permanent sunshine. The second viewpoint is located a little higher, it is surely the highest point of the city “Miradouro Da Graça”. This viewpoint is ideal at the end of the day to watch the sunset while enjoying a good beer on the terrace. It is to me one of the best places to visit in Lisbon 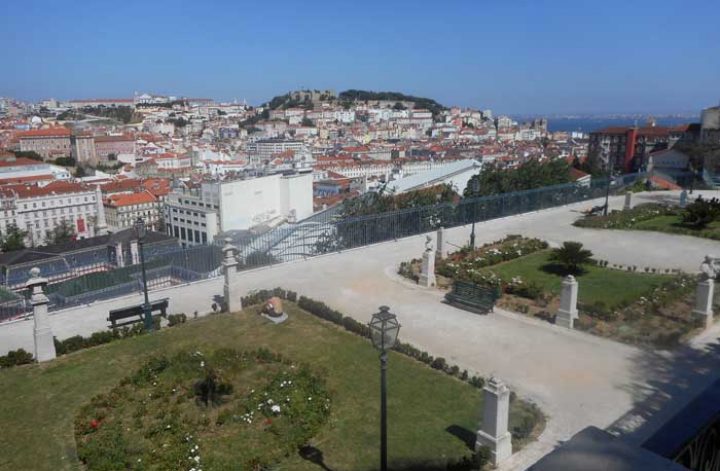 When we look at Lisbon from its seven hills, we see that the city forms a U. On one side we have the imposing hills which surround the Alfama and on the other side there is Sao Roque. Sao Roque covers the central part of Lisbon with the districts of Bairro Alto and Principe Real. Two things to do absolutely if you are in the area, the Sao Roque Church and the Sao Pedro de Alcantara viewpoint, which is often lively in summer. 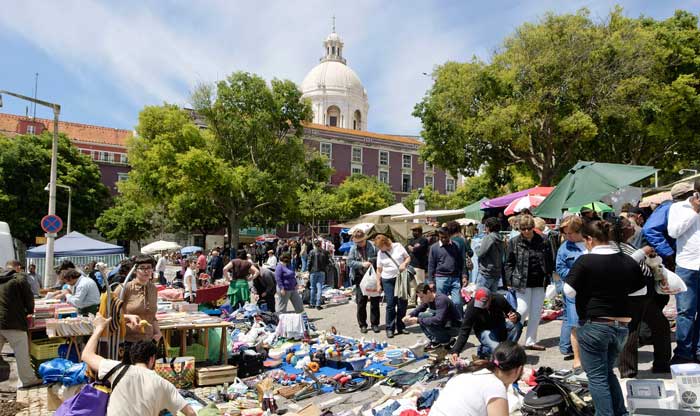 This hill takes its name from the patron saint of Lisbon “Saint Vincent” and extends over part of Alfama. the viewpoints Here are less interesting but nevertheless, you still have to go to the neighborhood flea market (Feira da Ladra) an unavoidable attraction to do in town. The market is open every Tuesday and Saturday 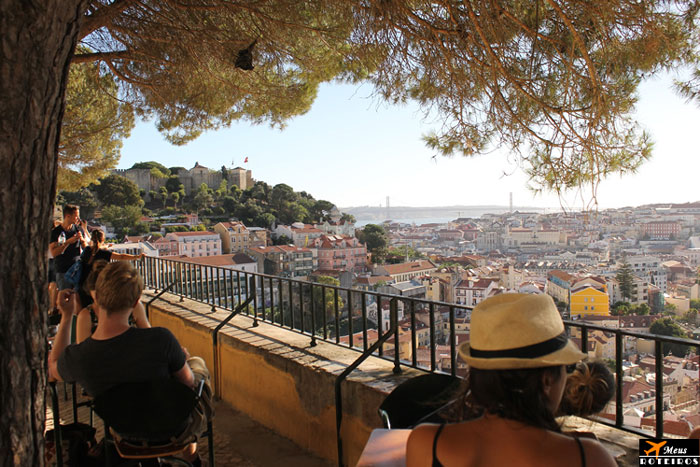 It corresponds to the Graça district. Historically it is here that the Portuguese king Dom Afonso Henriques settled with his troops before reconquering Lisbon. You can still find palaces and beautiful residences even now. It is a very good spot to take tram 28 in order to explore the emblematic districts of Lisbon. 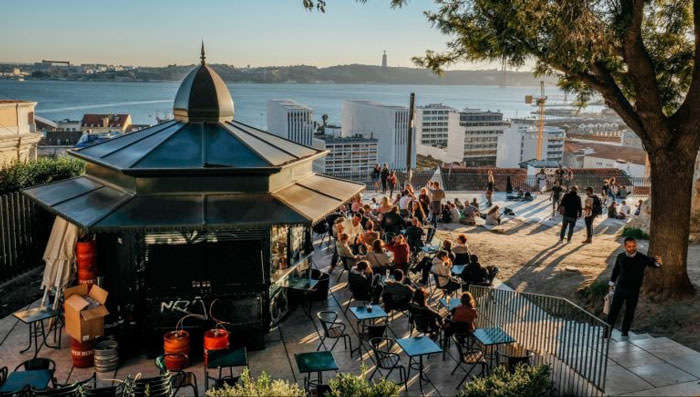 Located further west of the city, Santa Catarina corresponds to the districts of Cais Do Sodré and Chiado. It is truly the heart of the very modern city with its shops and numerous restaurants. There is nestled at the top, an absolutely magnificent viewpoint: the Miradouro Santa Catarina (or Adamstor). This view offers a panorama of the Tagus. Ideal in summer. The nightlife is also very present there. Party people will start their evening at Bairro Alto and end up on the pink street in Cais do Sodré. 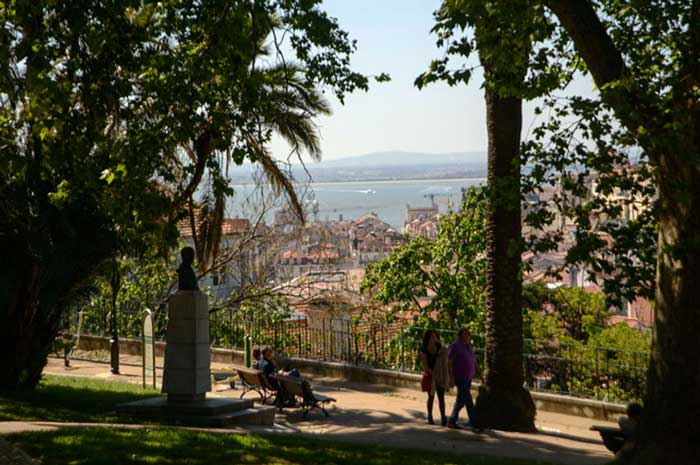 It is certainly the most central hill in Lisbon. It begins from Praça da Figueira and extends to Jardim do Torel (very beautiful viewpoint). 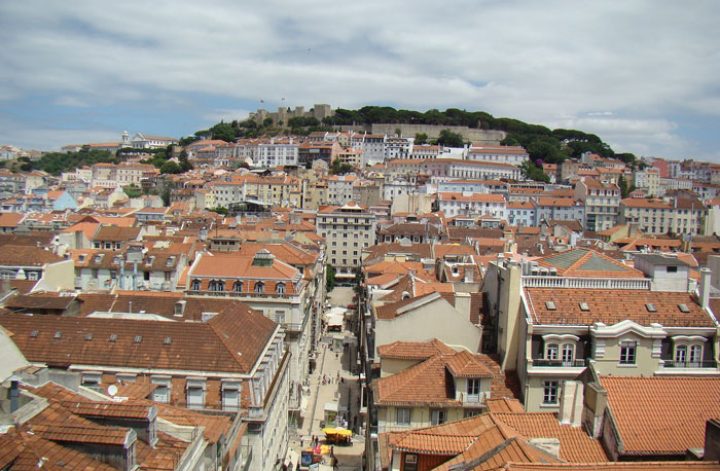 An equally central place in Lisbon, Chagas means injury and takes its name from the sailors who made the route to India, a journey often filled with difficulties. The emblematic view of this hill is certainly the Santa Justa elevator. You don’t necessarily have to queue to watch the view from the elevator. to contemplate the view, exit the shopping center (Armazens do Chiado) and head straight towards Rua do Sacramento. At the top of this street you will be in front of the Convento do Carmo, turn right and there you will have the footbridge which leads to the Santa Justa elevator.

If you want to admire Lisbon and not only through its hills, Ride Lisbon offers bike tours starting from the foot of the Alfama to Belém where you can discover Portuguese history and culture for a ride by bike.