What's the stories about Lisbon bridge?

In a few years, the Portuguese capital has become an essential tourist destination in Europe. Lisbon owes its charm to its ideal geographical location on the banks of the Tagus, the longest river on the Iberian Peninsula.

Photos of the city flourish everywhere on social networks and we have noticed one thing lately: the two bridges of Lisbon are an integral part of the scenery and are not just roads but monuments, just like the one you can find in Belém.

But why such a craze for these bridges?

The Vasco da Gama Bridge used to be the longest bridge in Europe (17km) until 2018 but the Crimea Bridge in Russia has just passed it (18km). This bridge was built on the occasion of the 1998 Universal Exposition in the district of the same name.

The construction which lasted 3 years was meticulous and more than 3000 workers took turns to build a bridge that was able to withstand possible earthquakes as it was the case in 1755. The length of the bridge is so important that it was necessary to take into consideration the curvature of the Earth and without it, the bridge would have been too short by a few meters.

The given name  “Vasco da Gama Bridge” is not trivial because the construction of the bridge which lasted 3 years, was completed in 1998, year which also marked the 500 years of the arrival of Vasco da Gama in India (1498). We remind you that Vasco da Gama is considered as the greatest Portuguese explorer of all time and contributed greatly to the wealth of the country in the XVIth century.

The bridge presents itself as a new alternative to the April 25 bridge which was starting to become gradually saturated and above all, it was at the time the only way to connect the north and the south of Portugal via the A2 highway.

How to get to the Vasco da Gama bridge?

You can take the metro on the red line towards “Aeroporto” and stop at Oriente. Oriente corresponds to the Expo 98 district, a financial area that is not very touristy but is still worth stopping at. Indeed this area is known for its gigantic mall, the Vasco de Gama Shopping Center. Also, the visit to the Oceanarium is a must.

Unlike the Vasco da Gama Bridge and its imposing architecture, here we find ourselves facing a more “modest” bridge which has quickly become the icon of Lisbon.

Building the first bridge in Lisbon is not a new idea. Indeed the idea had already appeared at the end of the XIXth century but it was not until the 1950s that it returned to the front of the political scene under the reign of the dictator Salazar. He aimed to build the first bridge in the city.

The colossal work was entrusted to an American company “American Bridge Company” with more experience (construction of the Golden Gate Bridge in particular).

If the April 25 bridge is very inspired by the Golden Gate Bridge and is so similar, it is especially because Lisbon and San Francisco are two fairly identical cities and often experience earthquakes.

The Golden Gate Bridge already met anti-seismic standards, this is why the works are entrusted to the same company and that the materials (especially steel) come from the United States.

After 4 years of work, the Salazar bridge (and not the April 25 bridge yet) was finally inaugurated on the 6th of August 1966 by the Portuguese dictator. It makes it possible to make the connection by highway between the north and the south of Portugal. When the dictatorship and the carnation revolution fell on April 25, 1974, the bridge was naturally renamed on this national day.

The bridge is today considered as a monument of the city and not just as a simple route means to be taken by thousands of people every day. Because yes, thanks to the connection between Lisbon and Almada, this area has intensively grown from 70,000 inhabitants to 150,000 in just 20 years.

Getting to the 25 April bridge by bike

To get there, you can take public transport from the downtown with tram 15 or the train from Cais do Sodré towards Cascais and stops at Alcantar-Mar.

Otherwise, it is possible to go there by bike. Our company RideLisbon offers bike tours every day in the early morning or afternoon from the city center (comercio square). During 3h30 we explore the essential districts of Lisbon to Belém. We mark a stop at the Lisbon marina, just next to the April 25 bridge in order to rest and take some photos like this one below. 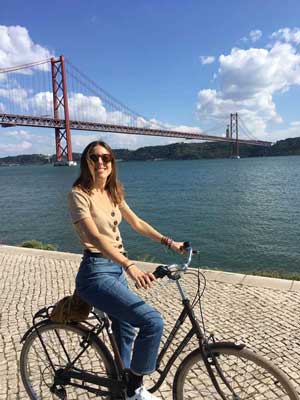 If you are interested or want to know more, you can find more information on the link below.